“Let’s rock for a Sheltersuit”

This year’s festival season has started. From Thursday 21 until Sunday 24 July, the Zwarte Cross festival opens its doors. The event promises once again to be an unparalleled spectacle. Except for the performing bands and an outrageous and enthusiastic public, Sheltersuit will be also be present.

The Sheltersuit Foundation produces waterproof jackets with a zipper sleeping bag for the homeless. The suits are made by volunteers, mainly Syrian refugees. The so called Sheltersuits are being made of donated materials and sleeping bags and tents that are left at festival sites. By spreading Sheltersuits, the foundation tries to keep as many homeless as possible, who are forced to live on the streets, warm and dry. 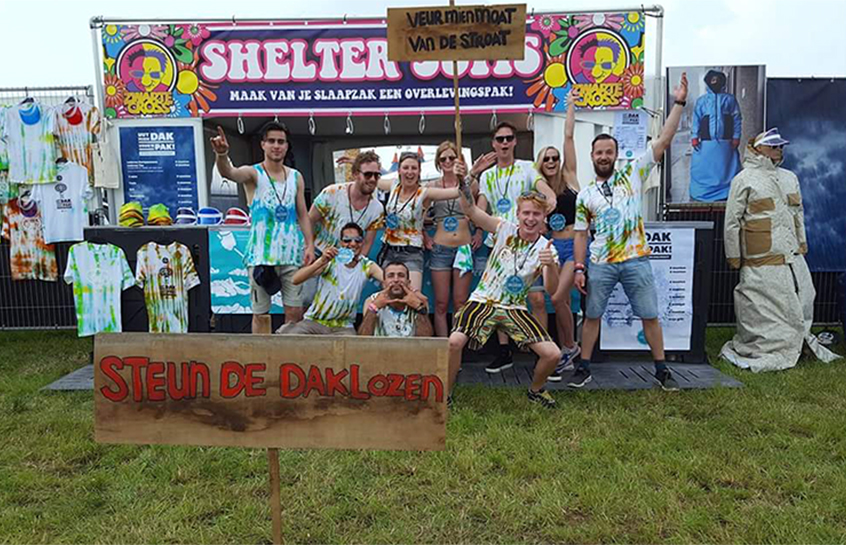 Another important goal of the collaboration between Zwarte Cross and Sheltersuit is to raise awareness among the festival visitors, namely of the fact that even in 2016, lots of people sleep on the streets. By joining forces with the Zwarte Cross, Sheltersuit tries to bring people closer together. “It would be nice if the festival visitors are willing to think about the enjoyment of other people, next to their own enjoyment and pleasure”, Bas Timmer, founder of the foundation, says.

“It would be nice if the festival visitors are willing to think about the enjoyment of other people, next to their own enjoyment and pleasure”

With an own exhibition stand and a large group of volunteers, including Syrian refugees and friends of the foundation, Sheltersuit will make a noisy hullaballoo. The visitors of the Zwarte Cross can see for themselves how a Sheltersuit is made, and one Sheltersuit is even being put op for raffle. This Sheltersuit will be handmade and customized on demand of the winner.

Besides all merchandise that is specially made for the festival, the festival visitors can also take part in the so called ‘Sheltershoot’. The crowd must put on a Sheltersuit in front of a green screen with the matching text “Let’s rock for a Sheltersuit”. Reasons enough to, in case you’re nearby, check out the festival.