The Netherlands is momentarily driving in low gear, even close to coming to a full stop. This affords us an opportunity to reflect. To draw up the balance. What have we been able to accomplish due to your generous support? Where does the Sheltersuit Foundation now stand, and where are we headed?

First a tragedy, subsequently a mission

The story is now well known. Over six years ago, Sheltersuit founder Bas Timmer was at the start of his career. His target? To design and launch a handsome line of clothing. Then the father of two close friends died. He was homeless, found in the street, in the Dutch city of Enschede. Death by hypothermia.

This tragedy hit Bas in the face. A young man from the Dutch province, he threw away all his plans to design and make fancy clothes. Clothes needed to serve a purpose! The idea for protective clothing for vulnerable people completely inspired him. He subsequently founded Sheltersuits.

Thanks to your generous support, a wonderful, well-organized business has been brought to life. The Foundation has now helped thousands of vulnerable individuals in the Netherlands, in Europe, and all over the world. Nevertheless, we are certainly not relaxed, sitting with our arms crossed, lying back in deep easy chairs, enjoying successes achieved to date.

These successes motivate us to work even harder, to help even more people in dire straits.

Standing Up for the Homeless

The Sheltersuit Foundation has never been more relevant. Homelessness gets worse every single day. For example, the number of homeless in the Netherlands has doubled in the last ten years. Far from exceptional, the situation in other European countries is, unfortunately, similar.

The present corona crisis only worsens an already bad situation. Businesses are failing, thousands are losing their jobs. How does that effect a person? Is there money for all the bills at the end of the month? Is there more alcohol abuse, more domestic violence? Are more marriages and relationships falling apart? All sadly to be expected as people’s certainties are threatened. Will there be even more homelessness due to Covid-19? 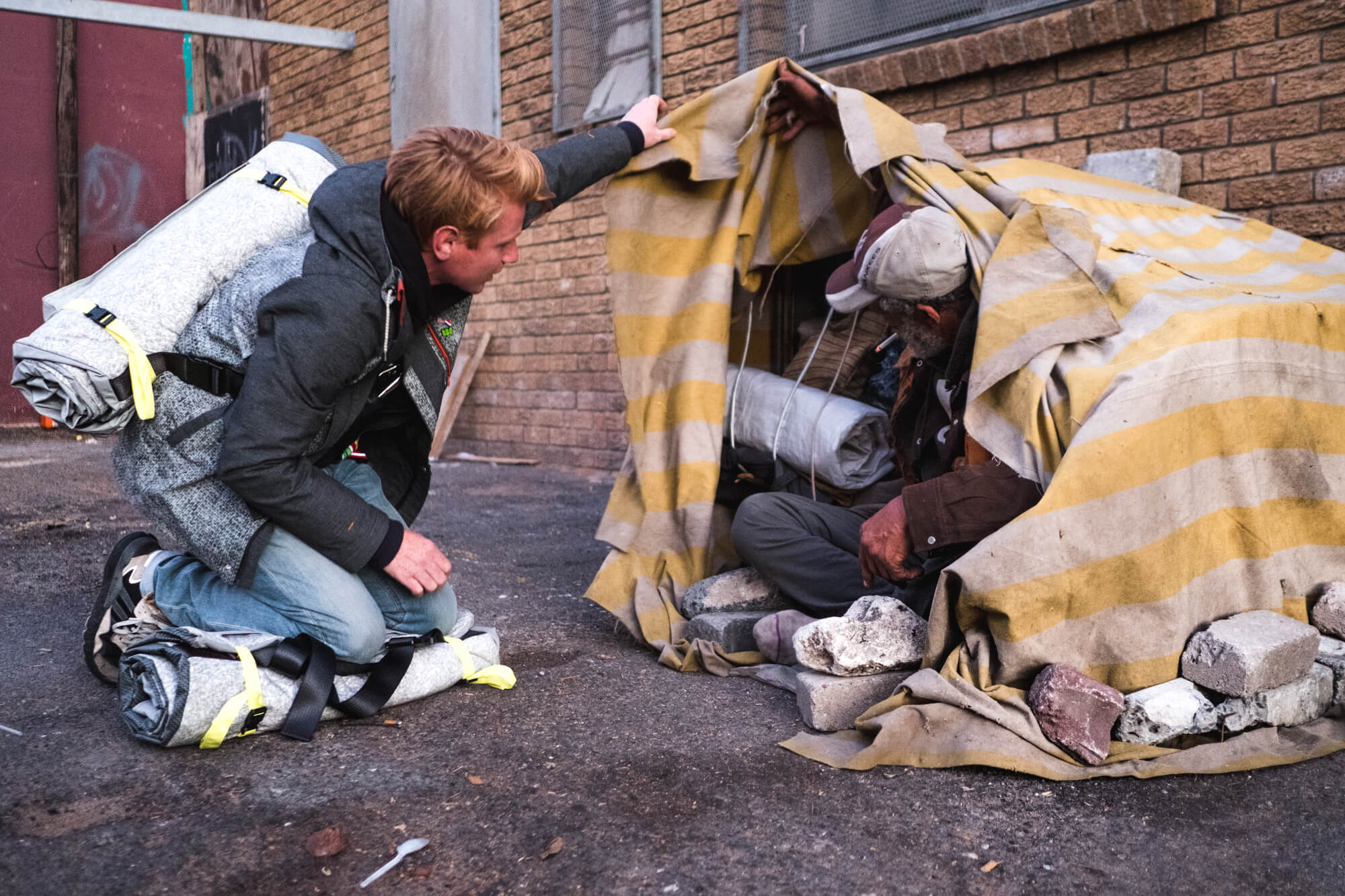 What is already a Covid certainty is that the capacity of shelters and care facilities has been significantly diminished: the reality of the ‘6 feet’ society. The result? More homeless remain in the streets. Some, voluntarily; others, of necessity. Using our camper, we have delivered around one thousand Sheltersuits to all sorts of institutions for the homeless here in the Netherlands. From north to south and from east to west. Our important partners then guarantee their distribution. They are those who know best who are most in need of our suits.

Sheltersuit is also busy beyond our own country’s borders. Last year we drove our camper through Germany, England, and Scotland. In Germany, around 50 thousand people live on the street. Another hundred thousand have no permanent place to live. That is why we distributed 100 suits to our neighbors to the east. Including to Robert, only 29 but already surviving on the street for over 12 years.

Does this mean that our work is merely a drop in the bucket? On the contrary! Each and every Sheltersuit can save a life. A suit gives warmth and protection and we are proud to say we have already given away thousands of them. As important as the suit itself is the message that is sent when one is given away: ‘We see you; you are not forgotten!’

Ten suits were recently delivered to Haus Cosima in Bayreuth, Germany, a temporary shelter for the homeless. Bas Timmer was presented with the Vorbildpreis in this university city, for his accomplishments as a successful, social entrepreneur. Bayreuth has become Ground Zero for the Foundation in Germany: the location we use to expand our name recognition there, working together with Felix Schmidt who actively approaches both the German media and national organizations for the homeless on our joint behalves.

We have also distributed dozens of suits in London and in Edinburgh. In Scotland, we worked together with the Destiny Angels of the Destiny Church there. Dozens of suits were given to rough sleepers in Great Britain.

Easing the pain for refugees

Refugees are, of course, often forced to sleep outside. These people, young and old, who are on the run from war, poverty and/or persecution. Men and women adrift during their long, exhausting and risky journeys which more often than not end in refugee camps. Even in the best of times, sanitary conditions in such camps are awful and the general situation is humiliating: no real sanitation, no protection, lots of violence and abuse.

Who is hit the hardest? Children. That is why we distributed nearly 900 child’s Sheltersuits to vulnerable kids living on what is no more than a human ‘garbage dump’ on the Greek island of Lesbos. Some of these kids’ suits were also sent to Samos.

Earlier, we handed out 650 Sheltersuits to refugees in Sarajevo. 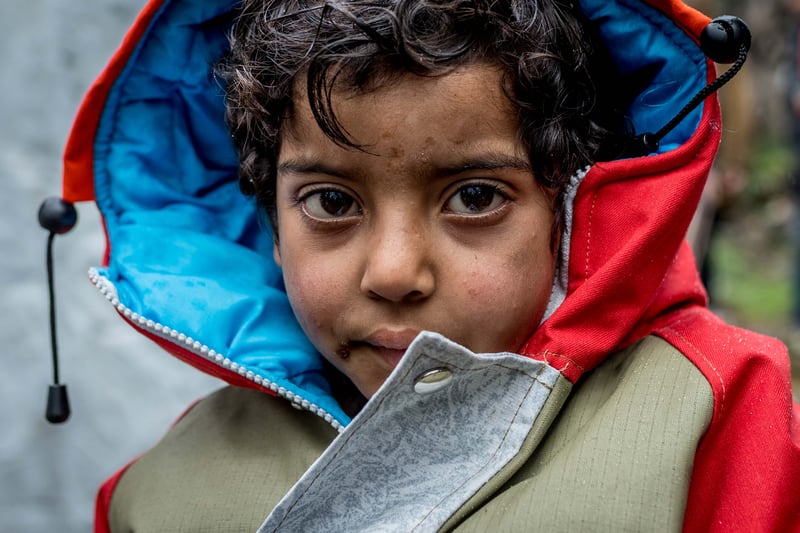 The USA: land of unlimited opportunity, the American Dream. A country full of rags-to-riches narratives and self-made men. But what happens to individuals there when life gets tough? The social safety net is nearly non-existent. For example, rising costs of living in certain cities is a huge problem in the States, the number of homeless grew rapidly.

And now, there is corona. The number of the unemployed in the States is well over 22 million at the moment and still growing. The working community is being hit harder than ever before, only comparable to the Great Depression.

Will even more temporary tents appear in the city streets of America? Even more homeless at the entrances to the subway? Even more people in rags sleeping under cardboard and newspapers on park benches? More than likely.

Our work is, therefore, more relevant than ever. The Sheltersuit Foundation is now attempting to expand into the USA from New York City, a city so incredibly hard hit by the Covid-19 virus. Noelani Rees and Kika Buhrmann are attempting to give the homeless there a face, working from New York. Small acts, HUGE Impact.  According to Kika, what the homeless there want most is to be recognized. In other words, to use distributing Sheltersuits to initiate the dialogue. Not only warmth but someone who listens and motivates, helping people to change the direction of their lives. 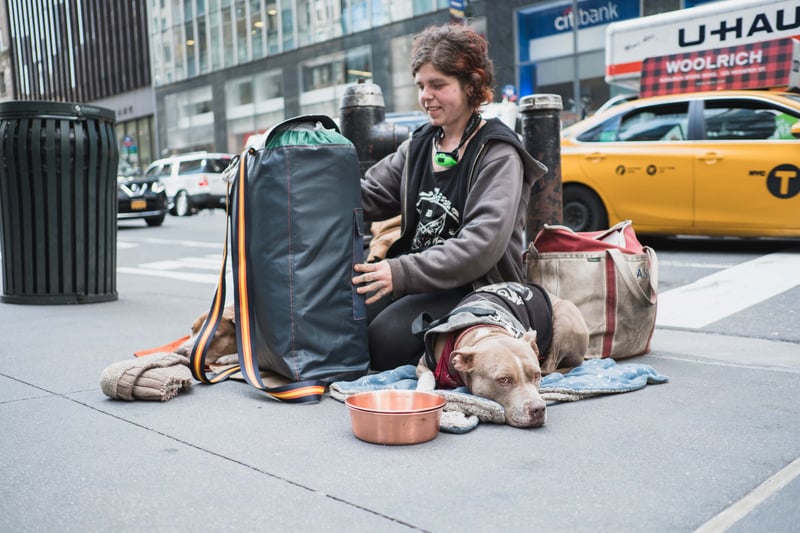 In South Africa, a social factory for suits is already up and running full time. In Faure, former homeless individuals are producing Shelterbags for people still living on the street. These bags are Sheltersuits especially adapted to the hot South African climate.

Design Indaba has ordered hundreds of Shelterbags. And we are attempting to develop our activities there even further. Please keep supporting us so that we can help the most vulnerable people living in South African townships.

Back in our own city of Enschede there is now a social factory. It is the sewing studio where our workers, which include former refugees, produce Sheltersuits. These individuals take their first steps into the Dutch labor market in our safe haven. The Foundation hopes to give these people whose life was so uncertain, a brand new start.

Head of the studio is Fadi. In his home country of Syria, he used to make eveningwear for women. While fleeing and on the road, he slept outside for many nights. These days he manages the production of Sheltersuits, an item he wished he had had on many of those nights on the road. Another colleague is Delbrin, one of our true pillars of strength. He was used to making jeans in his home country and now he dedicates his sewing talents to helping others. Augmenting our contracted employees are some really talented volunteers including some who are mentally challenged or for some other reason cannot be regularly employed. 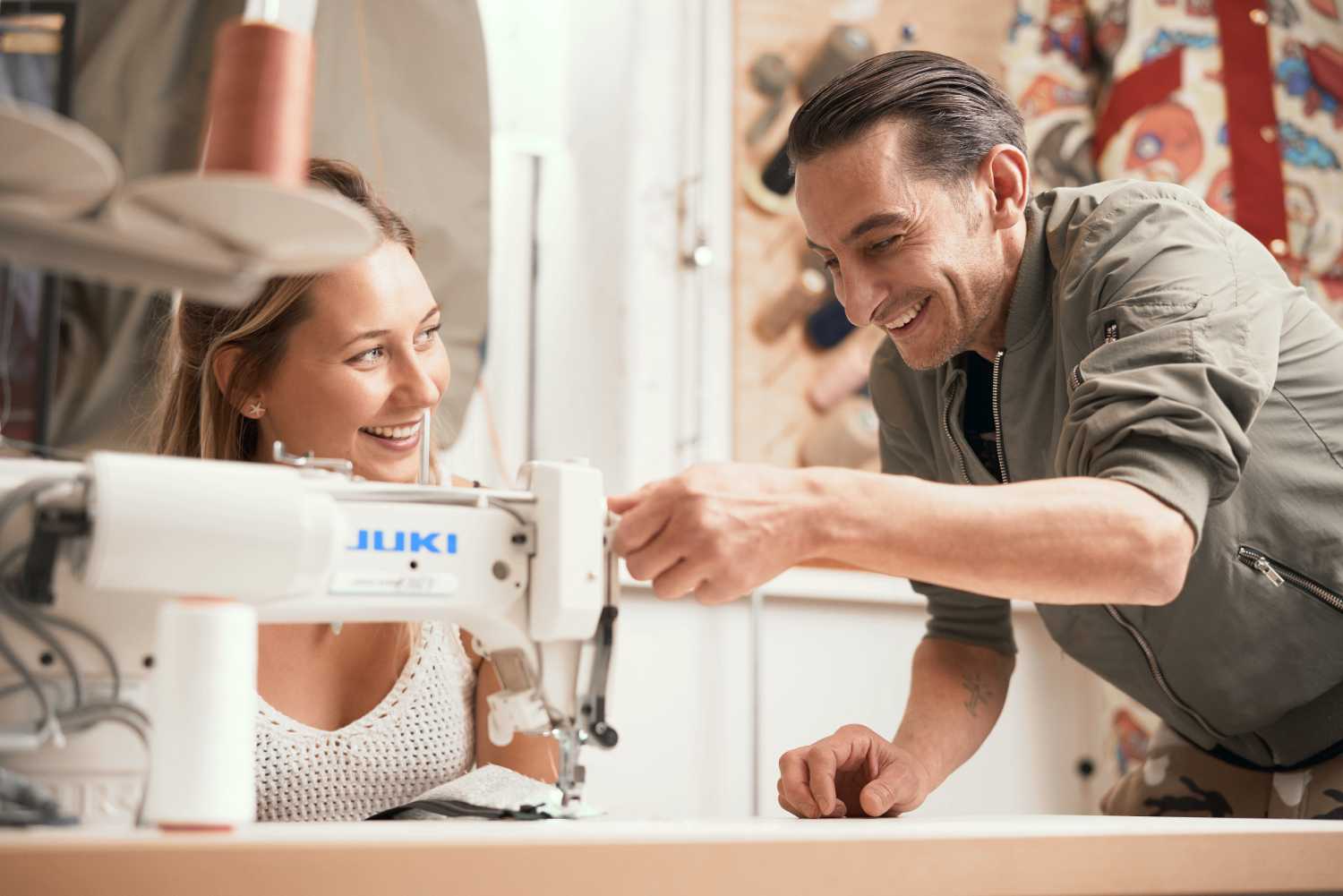 The Sheltersuit Foundation is both social and sustainable. We give a new life to second hand sleeping bags and the blankets that are donated from hospitals. We work together with fantastic partners who sponsor us in many, many different ways.

From Foundation to a Movement

Six years ago, a tragedy inspired Bas Timmer to step up and take charge. It was so shocking that someone he knew frooze to death on the streets of a country as rich as the Netherlands. A true shame. Timmer was successful in getting other people enthusiastic about Sheltersuits: volunteers, civil servants, homeless organizations, and many donors.

The Sheltersuit Foundation has matured but it is far from redundant. Our organization is now far more than just a foundation. We have become a social movement which comes to the defense of the vulnerable: the homeless and refugees from all over the world. Because everyone deserves protection, warmth and dignity.

Please help our movement grow. Help us and continue to support us. We welcome donations of both money and materials (sleeping bags and blankets). You can also assist us in expanding the Sheltersuit network even further.

Let’s make this world a better place. Together!

Dropbox: Supporter of the Sheltersuit Foundation