650 victims in Sarajevo grateful and warm

650 victims in Sarajevo are happy with their Sheltersuit

Despite one day of delay due to snowfall. Bas, fashion designer and founder of Sheltersuit has handed out the first hundred suits to victims in different places in Sarajevo. A Sheltersuit is the only way for most of them to stay warm and dry during day and night. The 650 Sheltersuits were made in different sizes, from kids – to adult sizes. Furthermore, the Sheltersuits were handed out during a period of two days as planned. Bas will then depart to another refugee camp in Chios (Greece) to scout out the situation and see how much Sheltersuits will need to be produced.

Bas Timmer was supposed to start handing out Sheltersuits on December 20th. Unfortunately, the Bosnian air traffic controller had made a decision to not land in Tusla due to the bad weather conditions. The airplane was forced to land in Budapest (Hungary). This caused one day delay in our planning. A day later he arrived in Sarajevo and immediately started the distribution.The refugees are staying in horrible conditions. They’re forced to find shelter in abandoned buildings. “It’s unimaginable, these are really degrading situations. The social work organizations have insufficient tools but they are trying their absolute best. A lot of snow has fallen and the weather forecast predicts that the temperature will drop even more upcoming week. I am so happy that we can make life for these people a little more bearable by giving them warmth and a little protection ”,says Timmer.“It’s now clear that we don’t have enough Sheltersuits with us to give everyone. I feel horrible, I would like to come back next week with another load , but that is no option, because we have not enough supply left.”

“It’s now clear that we don’t have enough Sheltersuits with us to give everyone."

The victims whom Bas has encountered are incredibly happy with their Sheltersuit. Many refugees will shortly depart to the Croatian border because they know they won’t be cold anymore. The Sheltersuit is worn as a jacket during the day and in the evening transformed into a comfortable wind- and waterproof sleeping bag. The joy among the receivers is enormous.“This is what us drives to keep going. I hope that every contributor sees these images in the newspaper. It’s such grateful work and the people are so incredibly happy with the suit”. 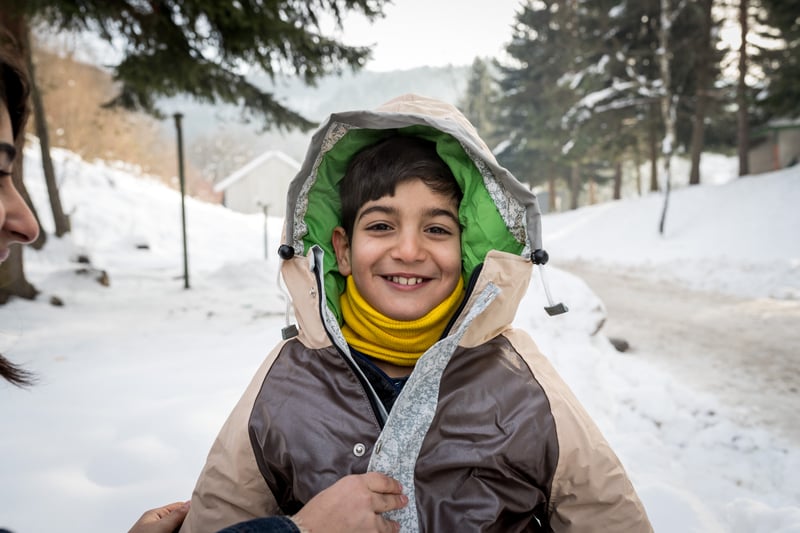 Part of the large Sheltersuit campaign

This action in Sarajevo is part of the foundation’s ambition to produce and hand out 3000 Sheltersuits along the borders of Europe. Hundreds of individuals from Enschede, the hometown of Bas Timmer, have donated their old sleeping bags. These sleeping bags together with other materials are upcycled into a Sheltersuit: a a jacket and sleeping bag in one. The Sheltersuit bag is specially designed to carry one Sheltersuit. These special bags were made in October by 1000 sewing students, from 11 schools. The Sheltersuits are produced in our workshop by 14 former refugees, who are on Sheltersuit’s payroll, as well as 86 volunteers.

Not only in Bosnia but also in Greece are the problems for refugees still remotely great. Last year Sheltersuit handed out two trucks full of Sheltersuits on Lesvos, but there are many more islands where the living conditions are degrading. Therefore, Bas Timmer will depart on December 23rd to Chios, a small eastern Greek island, to review the situation.

In order to soften these victim’s circumstances, Bas wants to give them warmth. To achieve this Sheltersuit needs every help it can get. Although a lot of materials are being donated, the foundation also needs money. The money is needed to cover the production-, transport- and housing costs.

Before the start of the winter, we want to hand out 3,000 Sheltersuits. We have a problem on the doorstep of Europe: many people, including young children, are homeless or on the run. Governments are not taking appropriate action, nevertheless, we ca..

Thousands of Refugees are stuck in Europe’s Backyard

Just another day in Europe's backyard This Winter, we, the Sheltersuit Foundation, need to start our national campaign with an emergency call: At this very moment, war victims are suffering in our backyard. Our European backyard. They are stuck all a..

Before the start of the winter, we want to hand out 3,000 Sheltersuits. We have a problem on the doorstep of Europe: many people, including young children, are homeless or on the run. Governments are not taking appropriate action, nevertheless, we ca..