15 Sheltersuits handed out in Edinburgh

The last stop of the Sheltersuit UK Tour ended in Edinburgh. A month earlier, the Scottish capital was the scene of the Worlds Big Sleep Out. During this event, awareness was raised to solve the global homelessness issue. In Edinburgh, the Sheltersuit Foundation handed out fifteen Sheltersuits to help homeless people to get through the cold winter months.

The Worlds Big Sleep Out is the inspiration for the Sleep Out in Enschede, which the Sheltersuit Foundation organizes on the night of 14 to 15 March. The visit to Edinburgh has led to many beautiful, moving and sometimes poignant encounters. One thing is certain: the work of the Sheltersuit Foundation is desperately needed. Unfortunately, the end of the homelessness issue is not yet in sight.

Angels come to the rescue

Take a look at Billy from Glasgow, who has been living on the streets of Edinburgh for eighteen months. He is currently waiting for the key to an apartment, but the formalities are unfortunately not yet completed. Bas had a conversation with him in front of a supermarket, while he was talking to volunteers from Destiny Angels. The Angels are a division of the Destiny Church Edinburgh. 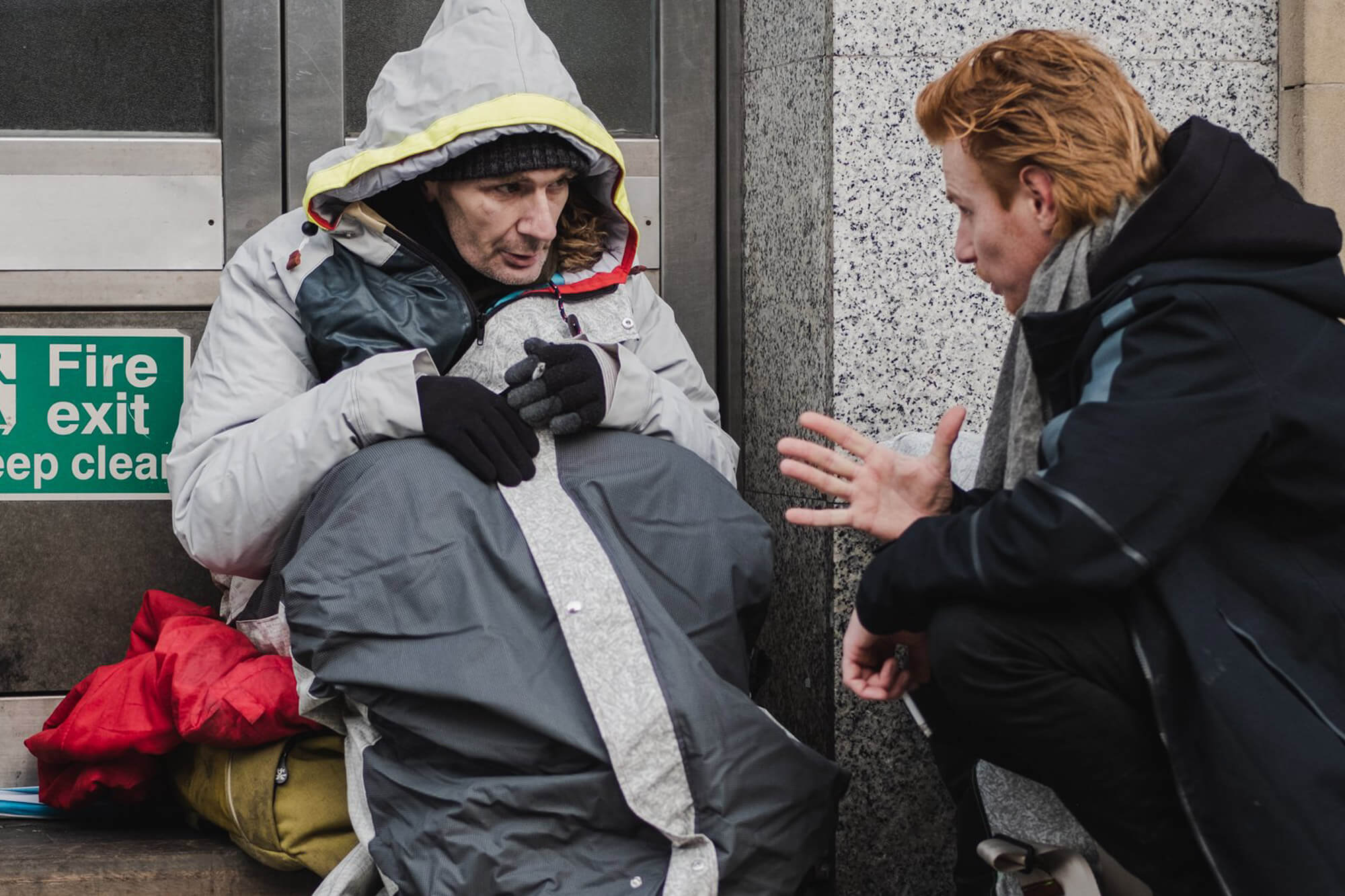 This church is very concerned about the destiny of people at the bottom of society. That is why volunteers provide free meals for the homeless, offer psychological support and help them to find accommodation. The Destiny Angels move mountains. They know the local rough sleepers and the problems they face well, because some of the volunteers used to be homeless themselves.

Sleeping in the cemetery

"How are you?" That was the first question Bas asked Gary. Gary was sitting on a piece of cardboard in front of a shop. He was only wearing a thin sweater, hardly enough to protect himself from the harsh weather. "Cold!" was Gary's answer. In the conversation that followed, it became clear that he regularly spent the night at a cemetery in Edinburgh. Without a sleeping bag or blanket to keep him warm. He was therefore delighted with the Sheltersuit Bas handed to him. "Thank you so much" was his response. “It's a great design. Your organization will probably save a lot of lives with these suits! ”

At another location in Edinburgh Bas had walked past a porch a couple of times, where he had spotted a mattress and some personal items. There was, however, no sign of the owner. After a few times, Bas finally found the resident. It was a cordial, homeless man in his forties who was very enthusiastic about the Sheltersuit initiative. He nevertheless declined when Bas offered him a Sheltersuit. “Sometimes being out here on the streets is hard for me, but I'll manage. Please give this suit to somebody who needs it more than I do.”

On the street after family troubles

Joe became homeless after a divorce four years ago. He gradually lost everything and eventually ended up on the street. "Life is hard on the streets, but I'm happy I still see my kids." Every day he tries to raise eighteen pounds. That amount is enough to sleep somewhere with a roof over his head.

If he does not get the money together, he is forced to sleep on the street. He was therefore very grateful for his Sheltersuit. “Just in time! My sleeping bag was completely worn out!" Bas: "That encounter really moved me. He really tried to help us by giving us information about where to find other local homeless people who might benefit from a Sheltersuit.” 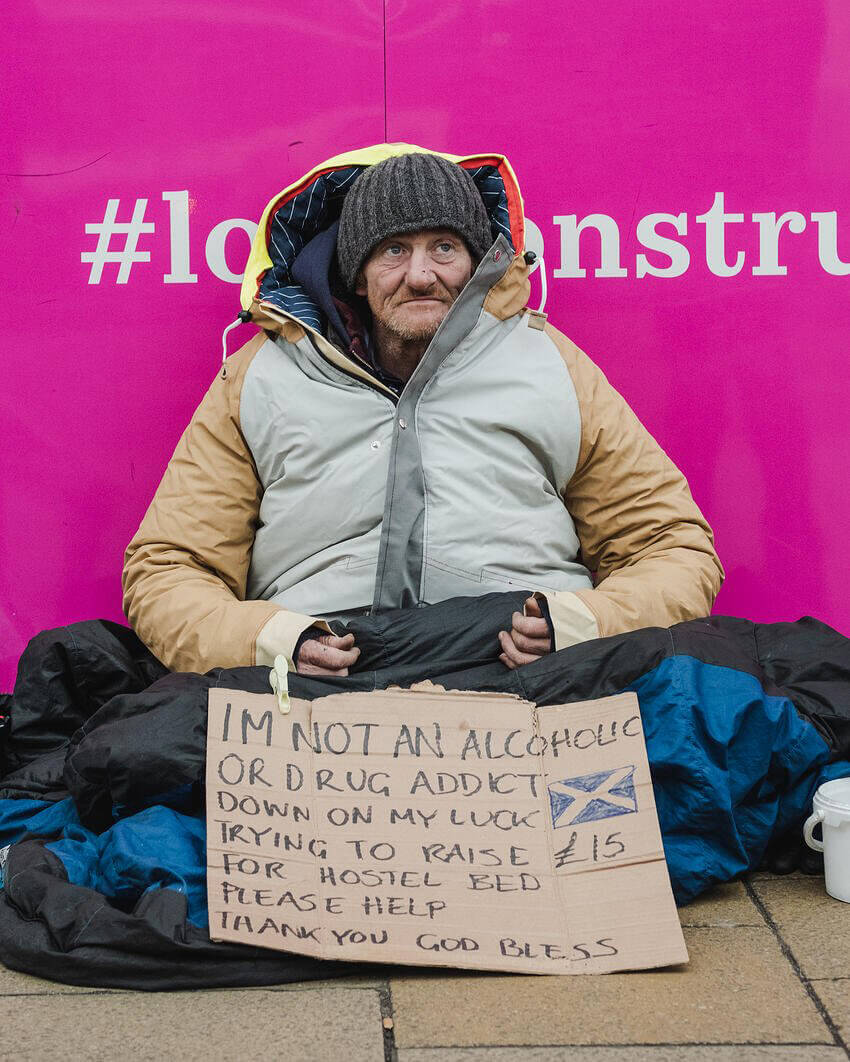 Bas handed out some 30 Sheltersuits during the Sheltersuit tour across Great Britain. He is very grateful to companies, organizations and individuals. It is thanks to their initiatives, crowdfunding and fundraisers, that the work of Sheltersuit is possible.

When he explained the work of Sheltersuit Foundation to homeless people and volunteers in the UK, it mainly focused on explaining the Sheltersuit itself: a water and windproof jacket and a sleeping bag in one.

But to tackle the homelessness issue, it is not just about the product, but about our mindset: “We are people helping people!” Sheltersuit Foundation, together with local authorities and with the help of companies and individuals. “This is only possible with involved entrepreneurs, such as Jongbloed Fiscaal Juristen. They provided a camper and contribute financially. Great! ”

Bas had a wonderful experience at the end of the UK tour, when stopping for gas with the camper. The checkout employee at the gas station glanced at the camper and asked: “Do you help the homeless?” This surprised Bas, who tehn asked how he knew. The cashier, Phil, explained that he had seen the name Sheltersuit on television. In the conversation that followed, Bas explained the mission of the Sheltersuit Foundation. Then Phil said: “I know this homeless kid named Sam. He is nineteen years old and Sam could really use a suit like this.” 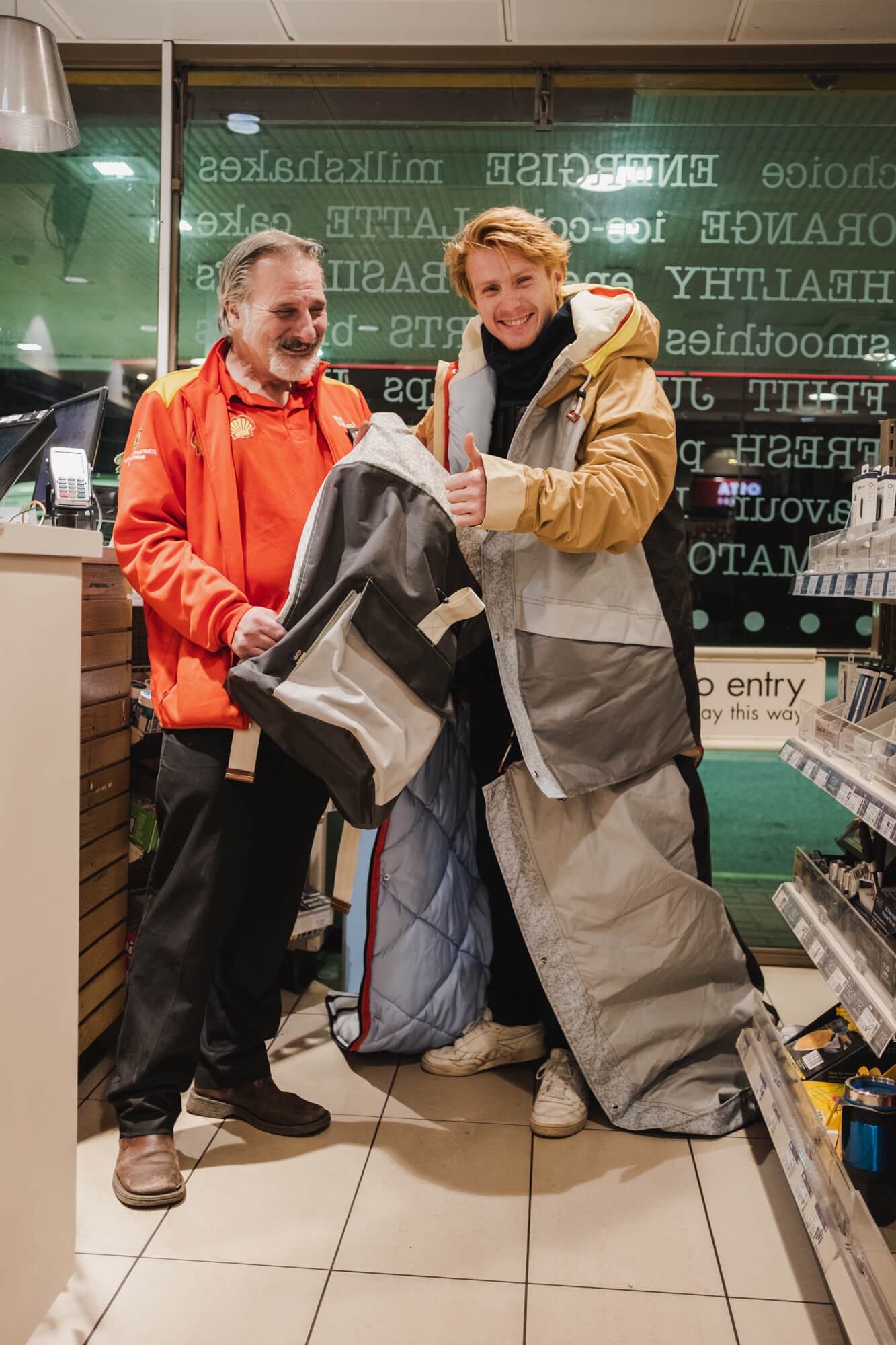 Bas was very happy to hand over the last Sheltersuit to Phil, who will make sure the Sheltersuit gets to Sam. Phil urged Bas to visit him during his next visit. A meal and made-up bed will certainly be ready.